Dealing with Failure: The Guide on How to Make the Most of Your Mistakes

During our younger years, we often believe that doing poorly on a test or assignment can ruin our lives. Later, if we fail to get accepted into a certain college or university, everything seems to go downhill. Even minor miscommunications with parents can frustrate us. And when we are rejected by a significant other, we can feel almost physical pain.

That said, every failure becomes an opportunity when approached with the proper attitude. Moreover, your school years offer unique opportunities to learn from your mistakes without severe consequences. Every time you try again after a failure, you become a better version of yourself.

In this article, we will take a close look at failures as powerful motivators. How should we treat them to alleviate disappointment and stress?

We offer you a detailed action plan on how to get the most out of any failure in school or at work. Finally, we analyze several inspirational examples of famous people who succeeded thanks to their mistakes.

⬇️ What Is Failure?

A failure is the inability to meet an internal or external expectation. It occurs when we are unable to achieve a goal. But you cannot fail at doing nothing, so only those that strive to improve themselves come across failure. But is success the only other option?

In many cases, we claim to suffer a failure when we should be on cloud nine. When we set a goal and only achieve part of it, we can often feel disappointed with the result. However, someone with a different perspective would probably praise us for our success.

Here are three examples of this phenomenon.

Your Attitude Is Key

The examples above illustrate that failure is relative to your perspective. Almost any situation can be perceived as something positive or negative, depending on the perspective.

How to turn failure into a springboard for success?

You will never learn anything new if you are afraid to fail.

Imagine you want to learn to swim but are scared of drowning. Every time you get into the water, fear will paralyze you. In other words, don’t start learning something with a failure in mind!

In 1991, Harward Business Review published its famous and very surprising research that showed how professionals are far worse learners than new people to the profession. First, experienced professionals are so afraid to fail that they would rather stick to their habitual approaches than try a different approach. Second, when their work is unsuccessful, they rarely question themselves. Instead, they look for the problem elsewhere. On the contrary, young specialists tend to analyze their failures with more self-criticism.

� 4 Lessons Failure Can Teach Us

The best way to face failure is to search for the life lessons it can teach you. Here is the list of some frequently overlooked pieces of wisdom everyone should remember.

Failure Is Not the End of the World

We do not live in a Hollywood blockbuster movie. Success does not guarantee you will “live happily ever after,” and failure can hardly ruin your life. At the end of this article, read about the life stories of five people who failed but whose lives improved after hitting the ground again. As Thomas Edison said, “I’ve never failed. I’ve just found 10,000 ways that won’t work.”

Failure Helps You to Re-evaluate Your Life

How does a child learn that a hot pan is dangerous? They touch it, and the burn hurts. We have many subconscious processes in our heads, and so very few decisions we make are totally conscious. In most cases, we tend to stick to the first result, so long as it is relatively acceptable. But a serious failure can make you reconsider your aspirations.

Failure Is a Powerful Motivator

For most people, a negative outcome is a sign to quit trying. But if you have the right mindset, it can become an endless source of motivation. Accept your failure as a challenge. By the way, you never restart at the same point as before. After a failure, you are more experienced. Now you know one way that does not work.

Failure Teaches that Success Is Not Guaranteed

When a person starts a new career, explores a different subject, or tries to achieve something in a new area, they expect success. They would never have tried in the first place if it had been otherwise! However, this expectation can limit us. Failure can happen due to causes outside your control; it does not mean you are not strong or smart enough.

� Making the Most of Your Failure: 5-Step Plan

Philosophy aside, we have developed a step-by-step plan for you to recover from failure. Follow these five suggestions to save your time for new achievements. 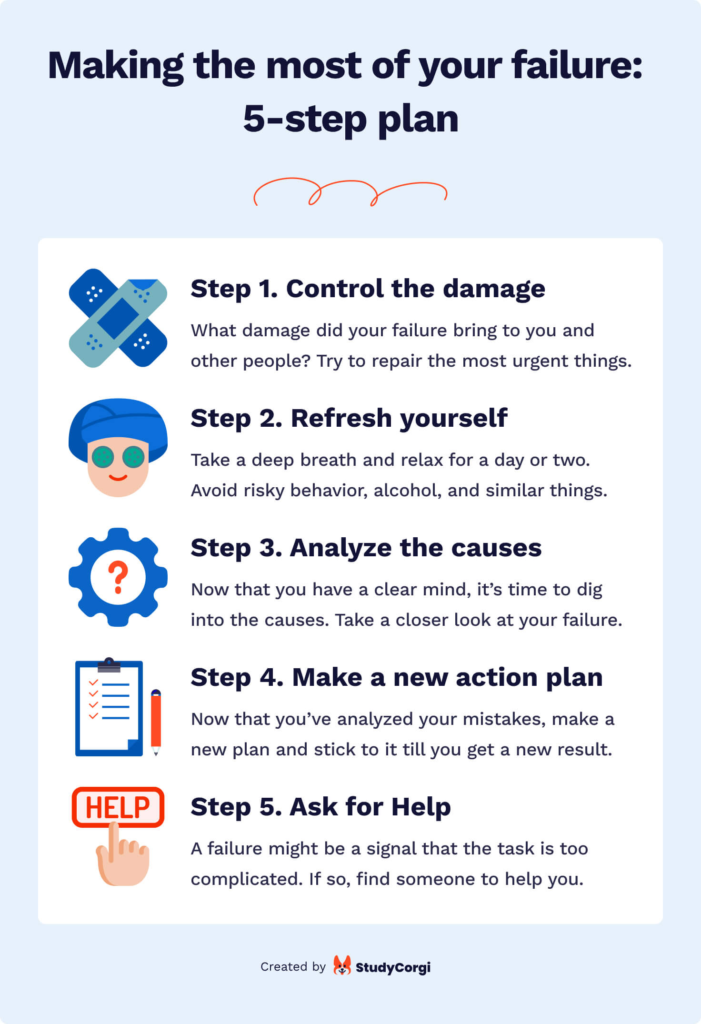 What do governments do after a natural disaster? They count casualties and detail lost property. It is impossible to rebuild anything without realizing what you have lost. Ask yourself, what kind of damage did your failure bring to you and other people? If it happened in the academic world, be sure to discuss the case with your professor or supervisor. Besides, knowing that there is very little damage can raise your spirits.

Now, it is time to take a deep breath and put your grim thoughts aside. You will cope with them later when you are relaxed and well-prepared. Mind that the bigger the failure, the more time your recovery will take. But try to stay busy during this downtime. Preferably, select activities you enjoy. Practicing a hobby or communicating with close friends are great ideas. Avoid risky behavior, alcohol, and drugs. Many people indulge in dangerous activities after a failure, but there are far more interesting things to do after a bad day.

Now that you have a clear mind, it’s time to dig into the causes that brought you to the place you are in now. At the beginning of the article, we gave three examples of “failures” that weren’t so bad at a closer look. Some seemingly negative cases can even change your life for the better. Understanding that there is no such notion as black and white will relieve your anxiety and enhance the learning process.

Now that you have analyzed its causes and defined whether your failure was preventable or not, it’s time to return to your task. After a failure, you become more experienced and usually do better. Make an action plan and stick to it until you get a new result.

Be aware that some failures occur because of a lack of motivation. For example, many young people apply to college because their parents want them to. They force themselves to study things they never liked. Such students get low marks and live under constant stress. A failure can show them they need to stop and find another application for their skills and time.

A failure can signal that you are trying to cope with an overly complicated task. Find someone to help you with part of the work (mind that they will also get some of your credit). Cooperation skills are highly valued in modern business. With that in mind, many professors urge their students to work in groups for the same project.

� 5 People Who Failed on Their Way to Success

Columbia University conducted extraordinary research to find out how the notion of talent negatively impacts students’ success in science. They gathered a demographically diverse group of young people in the 9th and 10th grades.

The students were told to read true-life stories of famous scientists who failed (more than once) in intellectual and personal spheres. However, these mistakes brought them to great discoveries. The research marked improved academic performance for all the participants, especially those who had frequently been failing exams in their classes.

This example illustrates that when people get used to failures, they stop perceiving them as something negative. Here are the stories of five famous people who became stronger after each defeat.

Several generations of people were raised watching Disney movies. A visit to Disneyland is the most cherished dream for millions of children worldwide. Could you imagine that the first newspaper editor told Mr. Walt that he lacked imagination and had no good ideas? People rarely believe in our abilities unless we are rich and famous. But external factors do not limit our worth.

As if that were not enough, Walt Disney had a complicated childhood. His father was so abusive that all his five children escaped their home. Later, with his brother Roy, Walt established Laugh-O-Gram Studios that went bankrupt after several years. He lost the rights to his first successful creation, Oswald the Lucky Rabbit. But, as you already know, those were the best things that could have happened to him because he grew stronger and had greater success later in life.

After a failed marriage, J.K. Rowling struggled to make ends meet. She was a single mother living on welfare with her little daughter, writing books and finishing her studies. These hardships predictably brought her into depression (which inspired her to create the Dementors). She admitted that she was the “worst secretary ever” and the most disorganized person in the world.

Rowling started to type her first Harry Potter book on a typewriter in cafes shortly after her divorce. Publishers rejected her writing twelve times before Bloomsbury Publishing agreed to print it.

Now Joanne is one of the wealthiest people in the world.

Vincent Van Gogh died being ignorant of his future success. He managed to sell only one piece of art in his lifetime. Years of mental illness, ruined relationships, and despair marked the 37 years he lived before his suicide.

After his death, Van Gogh became the leader of post-Impressionism. Unfortunately, he will never know that his failures made him one of the greatest artists in human history.

This living legend wasn’t born a champion. In high school, he was cut from the basketball team for not being tall and skilled enough. How many of us would give up and try something different after such news?

Adidas refused to sponsor Jordan because Jordan was only 6.6 feet tall. When Nike offered him support, Michael doubted, still aiming at Adidas. But his father told him: “You can be as tall as you want in your thinking.” In the end, his yearly contract with Nike amounted to $500,000. They agreed to pay a fine of $5000 for every game he played in their sneakers (for being considered too “bold”). And as we know, success has never left him ever since, despite missed shots and lost games.

Oprah had a poor background and went through a teenage pregnancy after a sexual assault. Her child died soon after the birth. The following period in her life was successful. She majored from Tennessee State University with a specialty in communications. She created a television show and was nominated for the Academy Award as an actress. But her own Oprah Winfrey Network initially did not match the audiences’ preferences and seemed to be a failure.

Winfrey learned from her own mistakes and changed the format. Now the channel is well-known and loved by millions of people.

When you lose a video game, you return to the last moment you saved and try again. You don’t self-chastise or get depressed. You know you will fail at some point, and you know you should try again. Every mistake is a small step in your development. If you have a success story, please share it with our readers in the commentaries below.

No votes so far! Be the first to rate this post.